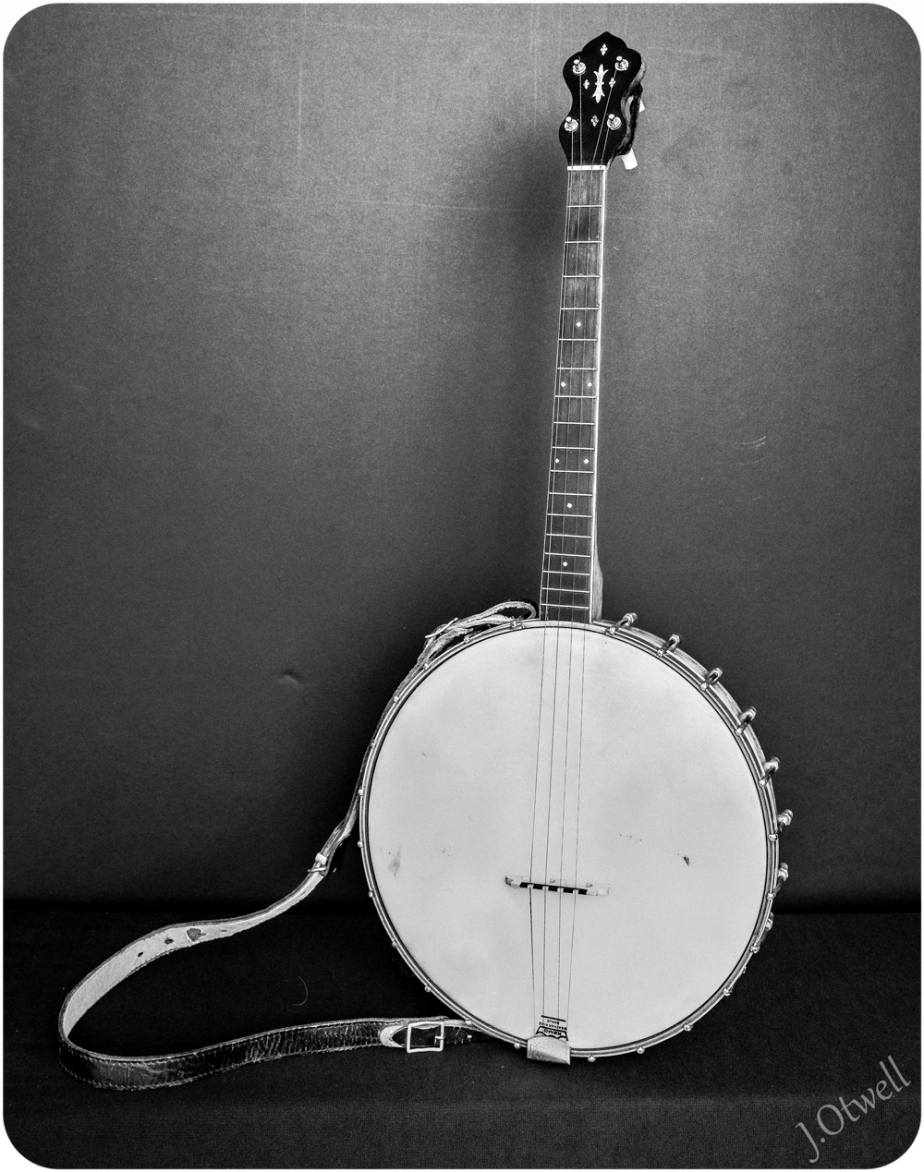 Banjo was the first string instrument I got my eager hands on, when I was  nine or so. There was an upright piano in our house, at which I was already flailing away , but the first whispers of skiffle were being heard, and guitars were starting to appear on TV, along with banjos, so I was primed…

My elder cousin, Pauline, was dating a fellow who was already playing in local string bands, and was in possession of a long-neck, four string tenor banjo, which was often to be found at Pauline’s house. Many a Sunday, my folks would park me there while they and the other  relatives would repair to a local pub for afternoon libations, which gave me a couple of hours with the banjo, flying blind, but figuring bits and pieces out , the way one does when there is strong interest. I also did a swap of some comics with a lad in our street who had a tacky plastic ukulele, but that banjo was a bona fide grown-up instrument, and consequently of more importance  to me than a toy-town uke.

When I got my first acoustic guitar at age eleven,  banjo retreated to the far periphery of my musical interest for many years. Electric and acoustic guitars, keyboards and bass in various forms became the tools of my professional trade, which didn’t have much need for the old plink plonk.

When I moved to Nashville in 1973, I became aware of the locally favored 5-string banjo and the high-octane stylists who had followed in the wake of Earl Scruggs’ ground-breaking  innovations – scared me to death, to be honest. However, when my father-in-law passed I inherited a vintage open-backed Savoy short-neck tenor banjo from him, which had a lovely old-timey sound to it, so I began to plink and plonk again, just for fun.

Interestingly enough, tenor banjo (played with a pick) had remained in fashion in traditional Celtic music circles, and the upsurge in interest that occurred in that form of music  from the ’80’s on gave Irish-style tenor banjo a new lease on life. Being first generation Irish myself, I’d become re-interested in the form and the great young (and not so young) artists who were producing thrilling neo-traditional records on both sides of the big pond, and for the next few years I immersed myself in it, aligning  with practitioners in both live and recording situations. I really enjoyed that period, becoming adept at bodhran and getting the chops up on cittern and Irish bouzouki as well as the trusty old tenor banjo.

During that time my dear globe-trotting pal Bob Saporiti found the magnificent closed-back Concertone tenor banjo that was featured in the blog, and kindly gifted it to me. I now have it strung with nylon banjo strings, which give it quite a different tone, while I keep the Savoy steel strung .

Although I’d never consider myself to be a bona-fide banjoist, it’s been my pleasure to plink and plonk away on quite a few albums that needed the flavor of the old-time plectrum tenor…grand fun always !